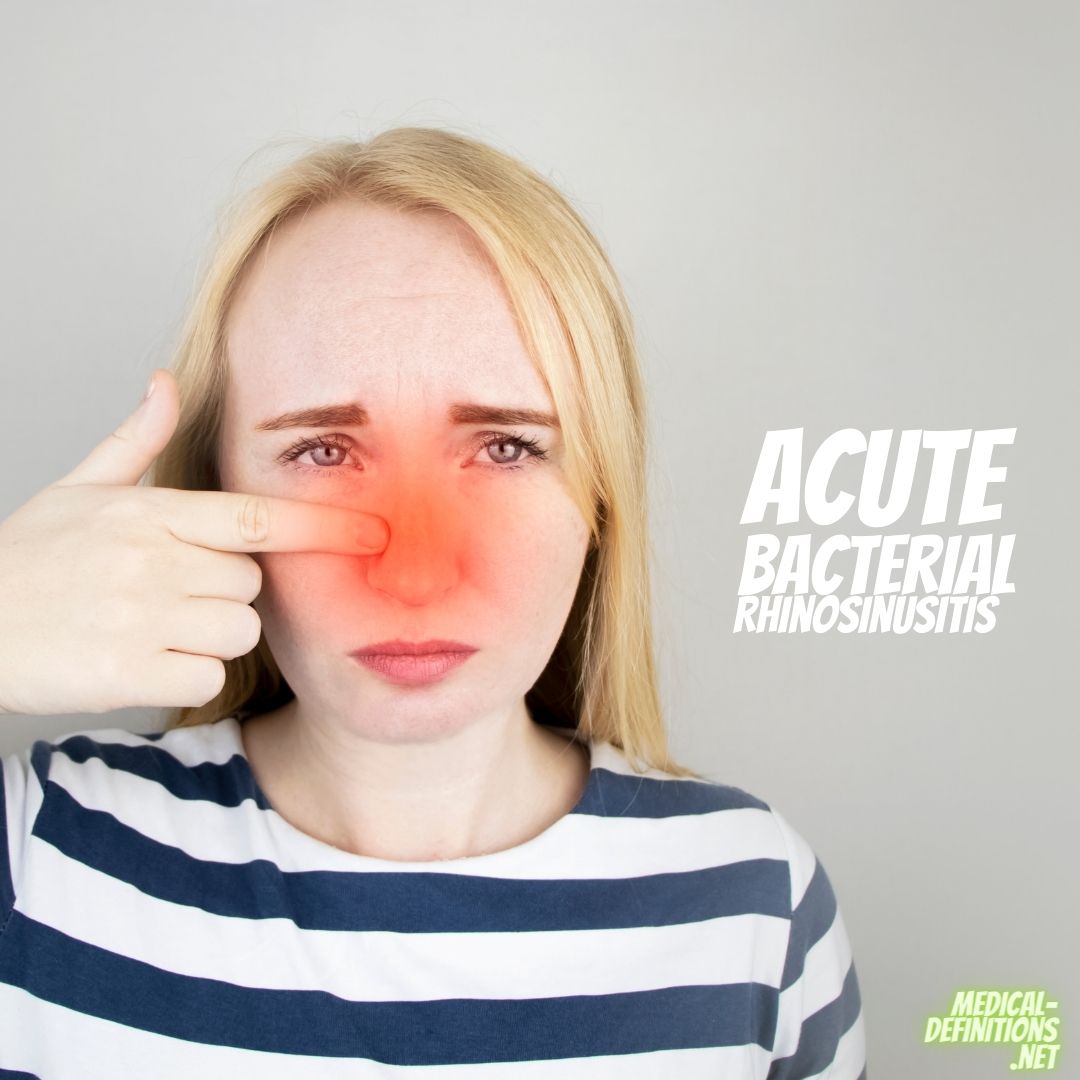 Acute bacterial rhinosinusitis is thought to be caused by a lack of mucociliary clearance, inflammation of the mucosa of the nasal cavity, and blockage of the sinus “pore,” or ostiomeatal complex.

Edematous mucosa causes the complex to become blocked, which causes mucus to build up in the sinus cavity and get infected by bacteria. The biggest of these ostiomeatal complexes goes deep into the middle meatus, to the middle turbinate. This complex is composed of complexes that drain the maxillary, ethmoid, and frontal sinuses. The sphenoid drains from a separate area between the septum and the superior turbinate.

Most of the time, S pneumoniae, other streptococci, H influenzae, and, less often, Saureus and Moraxella catarrhalis are the cause of bacterial rhinosinusitis. Pathogens vary by region in how common and resistant they are to drugs. If sinus aspirates are cultured, about 25% of healthy people with no symptoms may also have these bacteria.

Acute bacterial rhinosinusitis can usually be diagnosed based on symptoms alone. Even though routine x-rays are more accurate than clinical exams, the Agency for Health Care Policy and Research and the American Association of Otolaryngology Guidelines do not recommend them.

Consensus guidelines suggest imaging when clinical criteria are hard to evaluate, when the patient doesn’t respond to the right treatment or has been given antibiotics more than once when intracranial involvement or cerebrospinal fluid rhinorrhea is suspected, when a complicated dental infection is suspected, or when symptoms of more serious infection are present.

When needed, non-contrast screening coronal CT scans are less expensive and tell more than traditional sinus films. CT is a quick and effective way to check all paranasal sinuses, find areas of greater concern (like bone separation, periosteal elevation, or maxillary tooth root exposure within the sinus), and speed up treatment.

CT scans are fairly sensitive, but they aren’t always accurate. When opacification of the sinus is caused by other conditions, like chronic rhinosinusitis, nasal polyps, or mucus retention cysts, it can be hard to tell the difference between swollen soft tissue and fluid. Most people with an upper respiratory infection have problems with their sinuses, but only 2% get bacterial rhinosinusitis.

If cancer, intracranial spread, or opportunistic infection are suspected, MRI with gadolinium should be ordered instead of or in addition to CT. MRI will be able to tell the difference between tumor, fluid, inflammation, and mucus that has been spit out much better than CT. It will also be able to better outline the extent of the tumor (e.g., involvement of adjacent structures, such as the orbit, skull base, and palate). In addition, both MRI and CT can show that bones are breaking down.

Headaches, earaches, bad breath, toothaches, and tiredness are all minor symptoms. However, many more specific signs and symptoms are related to the affected sinus (es).

Acute maxillary sinusitis is the most common type of acute bacterial rhinosinusitis. This is because the maxillary sinus is the largest and only has one drainage path, which is easy to block. Common symptoms are fullness, pressure, or tenderness on one side of the cheek, but they may not always be there.

Pain may be coming from the upper incisor and canine teeth, which are connected to the sinus floor by branches of the trigeminal nerve. If your nose is blocked or your face hurts, you should look for pus in your nose (pressure). An infection can cause maxillary sinusitis in the teeth, so you should check tender teeth carefully for signs of an abscess. Sinus infections usually go away when the periapical abscess drains, or the diseased tooth is removed.

Adults with acute ethmoiditis often also have maxillary sinusitis, and the symptoms are the same as those above. Localized ethmoid sinusitis can cause pain and pressure on the high side of the nose between the eyes, which can spread to the eye socket.

Sphenoid sinusitis usually happens when all paranasal sinuses on at least one side are infected, called pansinusitis. The patient may say, “I have a headache in the middle of my head, and it usually goes to the top of my head.”

Acute frontal sinusitis can cause pain and tenderness in the forehead. This can be felt most easily by pressing on the roof of the eye socket just below the middle of the eyebrow.

Hospital-associated sinusitis is acute bacterial rhinosinusitis that can show up without the usual symptoms. Instead, it may cause fever in people who are very sick. It is often caused by long-term use of a nasogastric or, less often, a nasotracheal tube, which causes inflammation of the nasal mucosa and blockage of the ostiomeatal complex. Imaging tests often show pansinusitis on the side of the tube.

All patients with acute bacterial rhinosinusitis should have a careful evaluation of pain. For symptom reduction in viral rhinitis and bacterial rhinosinusitis without complication, the European Position Paper on Rhinosinusitis and Nasal Polyps (EPOS) 2012 recommends NSAIDs, saline nasal sprays, and nasal decongestants (pseudoephedrine, 30-60 mg every 6 hours, up to 240 mg/day nasal oxymetazoline, 0.05% or oxymetazoline, 0.05-0.1%, one or two sprays in each nostril every 6-8 hours for up to 3 days).

In cases of suspected bacterial rhinosinusitis, intranasal corticosteroids (e.g., high-dose mometasone furoate 200 mcg each nostril twice daily for 21 days) have demonstrated efficacy in reducing nasal symptoms and are recommended. However, other medications, such as mucolytics, vitamin C probiotics, and antihistamines, have not demonstrated efficacy in managing acute rhinosinusitis.

Antibiotics may be considered when symptoms last more than 10 days, when symptoms (including fever, facial pain, and swelling of the face) are severe, or when cases are complicated (such as immunodeficiency). In these patients, the administration of antibiotics does reduce the incidence of clinical failure by 50% and represents the most cost-effective treatment strategy.

The selection of antibiotics is usually empiric and based on several factors, including regional patterns of antibiotic resistance, antibiotic allergy, cost, and patient tolerance. For adults younger than 65 years with mild to moderate acute bacterial rhinosinusitis, the recommended first-line therapy is amoxicillin-clavulanate (500 mg/125 mg orally three times daily or 875 mg/125 mg orally twice daily for 5-7 days), or in those with severe sinusitis, high-dose amoxicillin-clavulanate (2000 mg/125 mg extended-release orally twice daily for 7-10 days).

In patients with a high risk for penicillin-resistant S pneumoniae (age over 65 years, hospitalization in the prior 5 days, antibiotic use in the prior month, immunocompromised status, multiple comorbidities, or severe sinus infection), the recommended first-line therapy is the high-dose amoxicillin-clavulanate option (2000 mg/125 mg extended-release orally twice daily for 7-10 days). For those with a penicillin allergy or hepatic impairment, doxycycline (100 mg orally twice daily or 200 mg orally once daily for 5-7 days) or clindamycin (150-300 mg every 6 hours) plus a cephalosporin (cefixime 400 mg orally once daily or cefpodoxime proxetil 200 mg orally twice daily) for 10 days are options. Macrolides, trimethoprim-sulfamethoxazole, and second or third-generation cephalosporins are not recommended for empiric therapy.