Here is a list of some common abbreviations that use the letters AEB:

As evidenced by: what does it mean in nursing?

As a nurse, you may have heard the term “as evidenced by” thrown around in charting or documentation. But what does it mean? And why is it important in the field of nursing?

First, let’s define the term. “As evidenced by” refers to documenting specific signs, symptoms, or actions that support a nursing diagnosis or intervention. In other words, it’s the proof that what you’re documenting happened.

For example, let’s say a patient is complaining of chest pain. As a nurse, you would document the patient’s chest pain complaint and any other relevant information, such as vital signs and physical examination findings. But, you would also document “as evidenced by” statements such as “patient reports chest pain on a scale of 8 out of 10” or “patient clutching chest and wincing in pain upon palpation.” These statements provide evidence that the patient is experiencing chest pain rather than just reporting it.

But why is this important? There are a few reasons:

So, next time you’re documenting a patient’s care, think about what “as evidenced by” statements you can include providing evidence of the patient’s condition and care. And always ask yourself, what are the signs and symptoms that support my nursing diagnosis or intervention?

In nursing, “as evidenced by” (AEB) statements are often used in conjunction with nursing diagnoses. A nursing diagnosis is a statement that describes a patient’s actual or potential health problem.

For example, a nursing diagnosis for a patient with chest pain might be “Acute Pain related to chest discomfort as evidenced by patient reports of chest pain on a scale of 8 out of 10, clutching of chest and wincing in pain upon palpation, and an increase in heart rate.”

The AEB statements in this example provide specific evidence supporting the nursing diagnosis of acute pain-related chest discomfort. This helps to ensure that the patient’s care is tailored to their specific needs and that any interventions are based on actual findings rather than assumptions.

Abnormal Eating Behaviors, or AEB for short, is a term used to describe a wide range of abnormal eating patterns. These can include overeating, undereating, binging, purging, and extreme dieting. But why do people develop AEB, and what can be done to help them? 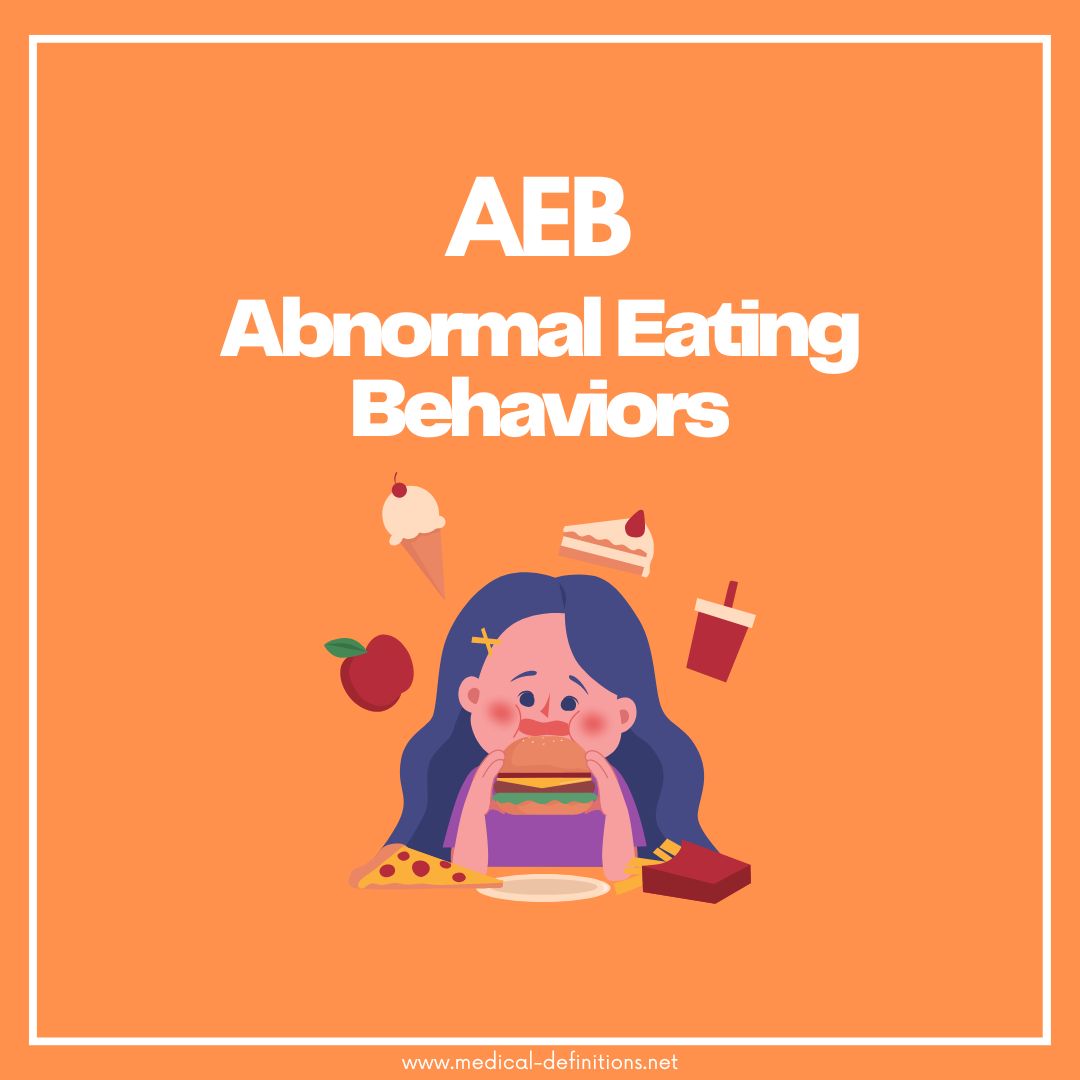 One of the main causes of AEB is emotional distress. People who are struggling with depression, anxiety, or other emotional issues may turn to food as a way to cope. For example, someone feeling stressed out may overeat to try and feel better, or someone feeling guilty may restrict their food intake as a form of punishment.

Another cause of AEB is a lack of proper nutrition education. Many people don’t know how to make healthy food choices or may be misinformed about a healthy diet. This can lead to restrictive dieting, overeating, and other unhealthy eating patterns.

But how can you tell if someone is struggling with AEB? Some signs to look out for include rapid weight changes, obsession with food, hiding food, and avoiding social situations that involve food.

So, what can be done to help someone with AEB? The first step is to seek professional help. A therapist or counselor can work with the individual to address the underlying emotional issues contributing to their AEB. Additionally, a dietitian or nutritionist can help them develop a healthy relationship with food.

The Arndt Endobronchial Blocker (AEB) is a specialized medical device used in bronchoscopic procedures to isolate specific lung segments. This allows physicians to perform procedures on a targeted lung area without affecting the rest of the respiratory system.

The AEB is designed to be a flexible double-lumen tube inserted through the patient’s mouth or nose and passed down into the trachea. The distal end of the tube is equipped with two channels: one for the bronchoscope and one for inflating the blocking balloon. The balloon is inflated to block the bronchus that leads to the designated lung segment, effectively isolating that segment and allowing the physician to perform the procedure without any interference from other parts of the lung.

The AEB is an essential tool in bronchoscopic procedures, and it’s considered a safe and effective way to isolate lung segments. It’s used to perform a wide range of procedures including, but not limited to, biopsy, foreign body retrieval, and treatment of endobronchial tumors.

Assessing the Evidence Base (AEB) is crucial in medical decisions. It’s all about taking a look at the research that’s been done on a particular topic to figure out what works and what doesn’t. But let’s be real here; it can be pretty overwhelming to sort through all the studies and figure out what’s relevant. So, let’s break it down and make it a bit more manageable. 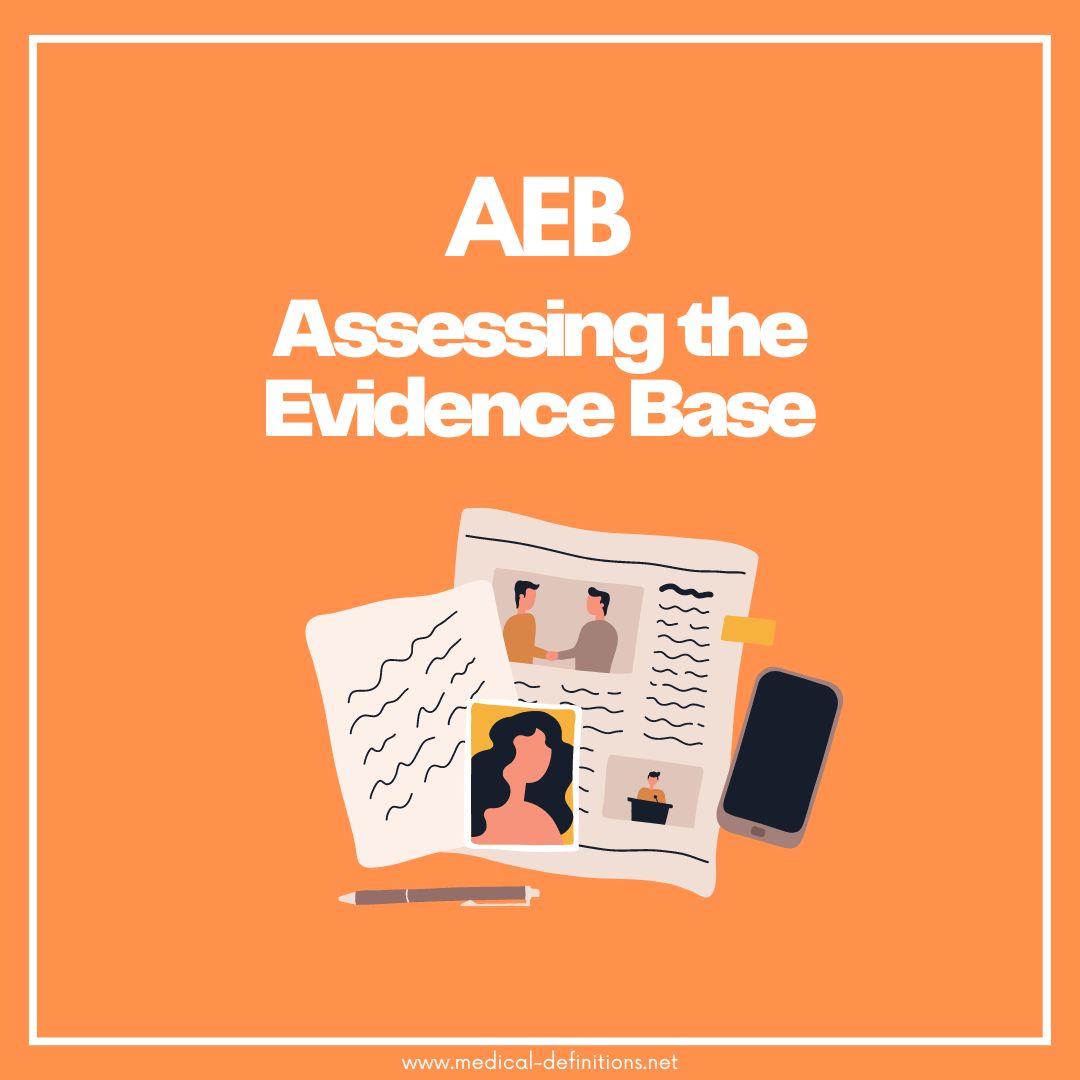 First, it’s important to understand that not all studies are created equal. Some are considered to be high-quality, while others aren’t. For example, a randomized controlled trial (RCT) is a pretty solid study. This is because it helps control variables that might skew the results. On the other hand, an observational study is considered a lower-quality one because it doesn’t have the same level of control.

When you’re assessing the evidence base, it’s also important to take a look at the sample size of the study. The larger the sample size, the more reliable the results are likely to be.

It gets a little tricky here: even high-quality studies can have conflicting results. So, what do you do when that happens? This is where systematic reviews come in. These studies look at a bunch of other studies to try and figure out what the overall evidence says.

One last thing to remember is that AEB isn’t just about looking at the studies themselves; it’s also about how they were conducted and reported. For example, a study funded by a company that makes a treatment being studied may have biased results.

All of this might sound a bit daunting, but don’t worry! AEB is something that healthcare professionals do all the time. And, as a patient, you can ask your healthcare provider about the evidence behind any treatments or procedures they’re suggesting for you.

Well. I hope you understand about AEB medical abbreviation meaning.