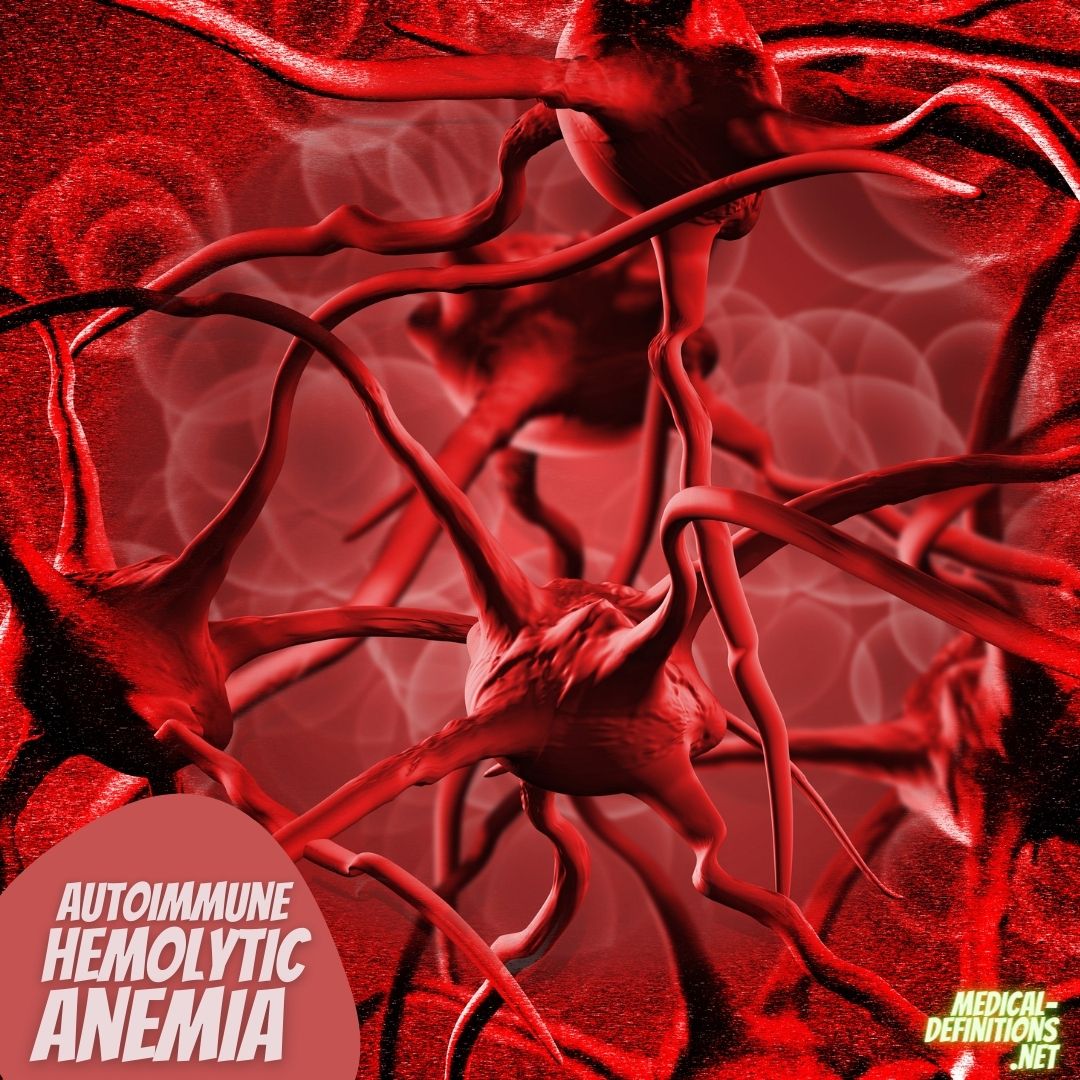 Warm autoimmune hemolytic anemia is an acquired condition in which an IgG autoantibody is made that binds to a red blood cell membrane protein and does so most strongly at body temperature (i.e., a “warm” autoantibody). Most of the time, the antibody is aimed at a basic part of the Rh system on most human red blood cells.

When IgG antibodies coat the red blood cell, the Fc part of the antibody is recognized by macrophages in the spleen and other parts of the reticuloendothelial system.

The interaction between splenic macrophages and an antibody-coated red blood cell leads to the removal of the red blood cell membrane and the formation of a spherocyte. This happens because the surface-to-volume ratio of the surviving red blood cell decreases. As a result, these spherocytic cells have less flexibility and can’t fit through the 2-mcm holes in the splenic sinusoids. Instead, they get stuck in the red pulp of the spleen.

Approximately half of all cases of autoimmune hemolytic anemia are idiopathic. The disorder can also occur with systemic lupus erythematosus, other rheumatic disorders, and chronic lymphocytic leukemia (CLL). It must be different from hemolytic anemia caused by a drug.

When penicillin (or other drugs, especially cefotetan, ceftriaxone, and piperacillin) coats the red blood cell membrane, the autoantibody attacks the membrane-drug complex. Fludarabine is an anticancer drug that weakens the immune system. This weakening lets a B-cell clone escape, which makes the harmful autoantibody.

Autoimmune hemolytic anemia usually causes anemia that comes on quickly and can be dangerous. Patients often feel tired and have trouble breathing. They may also have angina pectoris or heart failure. In addition, jaundice and a big spleen are usually present when the person is examined.

The level of anemia varies, but it can be very bad if the hematocrit is less than 10%. On the peripheral blood smear, spherocytes can be seen. This means that reticulocytosis is present. When there is a lot of hemolysis, the bone marrow may release red blood cells with nuclei. As with other hemolytic disorders, the haptoglobin level in the blood is low, and the indirect bilirubin level is high.

The antiglobulin (Coombs) test is used to figure out what’s wrong. The Coombs reagent is an IgM antibody from rabbits raised against human IgG or human complement. The direct antiglobulin (Coombs) test (DAT) is done by mixing the patient’s red blood cells with the Coombs reagent and looking for agglutination, which shows that antibody, complement, or both are on the surface of the red blood cells.

A positive indirect antiglobulin test means that many autoantibodies are binding to all of the red blood cell’s binding sites. This autoantibody shows up in the serum. Because the patient’s serum usually contains the autoantibody, it may be hard to get a “compatible cross-match with homologous red blood cells for transfusions since the cross-match shows the possible presence (true or false) of a red blood cell “alloantibody.”

The first step of treatment is to take 1–2 mg/kg/day of prednisone by mouth. Corticosteroids work well for both DAT-negative and DAT-positive patients with autoimmune hemolysis. Red blood cells from a donor will live as long as the patient’s red blood cells. Because the cross-match is hard to do, it may be necessary to give blood that is “incompatible.”

Transfusion decisions should be made with the help of a hematologist and a specialist in a blood bank. In the case of rapid hemolysis, death can happen when the heart and lungs stop working. To get rid of autoantibodies, therapeutic plasmapheresis should be done early in treating people with rapid hemolysis. A splenectomy may cure the problem if prednisone doesn’t work or the disease comes back after tapering the dose.

Patients with autoimmune hemolytic anemia who don’t respond to prednisone and splenectomy can also be treated with several other drugs.

Some people get better with rituximab, a monoclonal antibody against the B cell antigen CD20. The recommended dose is 375 mg/m2 weekly through an IV for 4 weeks. Rituximab is used with corticosteroids as the first treatment for some people with serious diseases. For example, patients who have had hepatitis B virus (HBV) infection in the past should take rituximab with an anti-HBV agent as a preventative measure. HBV reactivation, fulminant hepatitis, and even death can happen if they don’t.

Danazol, taken by mouth at 400–800 mg/day, works less often than in immune thrombocytopenia, but it is good for long-term use because it is not toxic. Immunosuppressive drugs like cyclophosphamide, vincristine, azathioprine, mycophenolate mofetil, alemtuzumab (an anti-CD52 antibody), or cyclosporine may also be used. Immune globulin given by IV at a high dose (1 g/kg daily for 2 days) may be able to stop hemolysis. However, immune globulin is very expensive and only helps for a short time (1-3 weeks).

Patients with autoimmune hemolytic anemia should see a hematologist confirm the diagnosis and figure out how to treat them.

If a person has symptoms of anemia or their hemoglobin levels are dropping quickly, they should go to the hospital.