What does FOC stand for in medical terms? Let’s find out FOC medical abbreviation!

Fear of childbirth, also known as tokophobia, is a condition characterized by an irrational or excessive fear of childbirth. This fear can be so severe that it interferes with a woman’s ability to become pregnant or carry a pregnancy to term.

Treatment for tokophobia may include therapy, such as cognitive-behavioural therapy or exposure therapy, to help a woman overcome her fear of childbirth. It may also involve working with a healthcare provider to develop a childbirth plan that addresses the woman’s fears and concerns.

In conclusion, the fear of childbirth is a serious condition that can significantly impact a woman’s reproductive health and well-being. It is important for women experiencing tokophobia to seek treatment to overcome their fear and have a positive childbirth experience.

Frontal-occipital circumference (FOC) is a measurement of the head used to assess brain growth in infants and young children. It is typically measured by wrapping a tape measure around the head, starting at the most prominent point on the forehead (the frontal bone) and ending at the most prominent point at the back of the head (the occipital bone). The resulting measurement is then compared to standardized growth charts to determine if a child’s head size is within the normal range for age and gender.

FOC is an important indicator of overall health and development in infants and young children. A small head size may signify malnutrition or other underlying health problems. In contrast, a large head size may indicate the presence of hydrocephalus (a condition in which there is an excess of cerebrospinal fluid in the brain).

It is important to note that FOC is just one of several measurements used to assess brain growth and overall health in infants and young children. Other important measurements include head circumference (the distance around the head) and head length (the distance from the top of the head to the bottom of the chin). These measurements are often taken together to give a complete picture of a child’s overall growth and development.

In conclusion, frontal-occipital circumference is an important measurement of the head used to assess brain growth and overall health in infants and young children. It is just one of several measurements to evaluate a child’s growth and development. It should be considered in conjunction with other measurements, such as head circumference and length.

Several factors can influence an individual’s feeling of control. One important factor is control over personal decisions, such as what to wear or eat. People with more control over these decisions tend to have a stronger sense of control overall.

In addition to personal decision-making, an individual’s feeling of control may also be influenced by external factors, such as their social environment or the availability of resources. People with supportive social networks and access to resources such as education and healthcare may feel a stronger control over their lives. 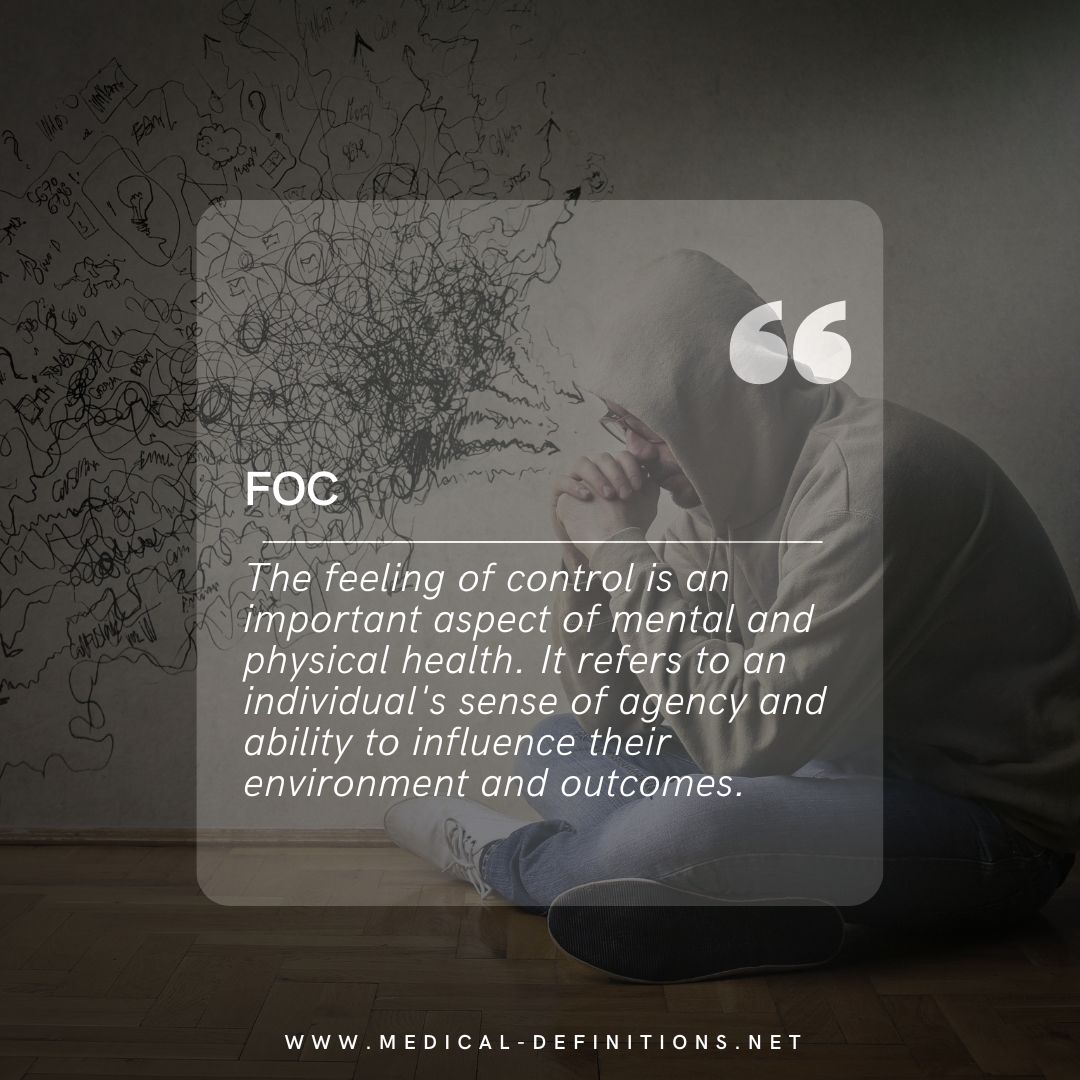 The feeling of control has been linked to several health outcomes. For example, people who feel a sense of control over their lives tend to have lower levels of stress and anxiety and are less likely to develop depression. They may also have a lower risk of developing chronic conditions such as heart disease and diabetes.

There are several ways that individuals and healthcare providers can promote a feeling of control. One way is through patient-centred care, which involves providing patients with information and resources to make informed decisions about their health. Other strategies include providing support and resources to help people manage their health, such as through self-management programs or rehabilitation services.

A frontal-opening cannula (FOC) is a medical device to deliver oxygen to the lungs. It is a type of nasal cannula, a thin tube inserted into the nostrils and connected to an oxygen source. The FOC differs from traditional nasal cannulas because it has a small opening at the front of the tube, just below the nostrils. This opening allows for the delivery of oxygen to the front of the nasal cavity, which can help to increase the amount of oxygen that reaches the lungs.

FOCs are generally well-tolerated and easy to use. They can be worn under the nose or over the ears and do not require a full face mask or a tracheostomy tube. They are also less intrusive than other oxygen delivery devices, making them more comfortable for patients to wear for extended periods.

It is important to note that FOCs are not appropriate for all patients. They may not be suitable for patients with severe respiratory distress or those who require high-flow oxygen. In these cases, a more advanced oxygen delivery device may be necessary.

In conclusion, frontal-opening cannulas (FOCs) are nasal cannulas used to deliver oxygen to the lungs. They are commonly used in patients with respiratory disorders to improve oxygenation and may be a more comfortable and less intrusive option than other oxygen delivery devices. However, they may not be suitable for all patients and should be used under the guidance of a healthcare provider.

Well, I hope you understand about FOC medical abbreviation.