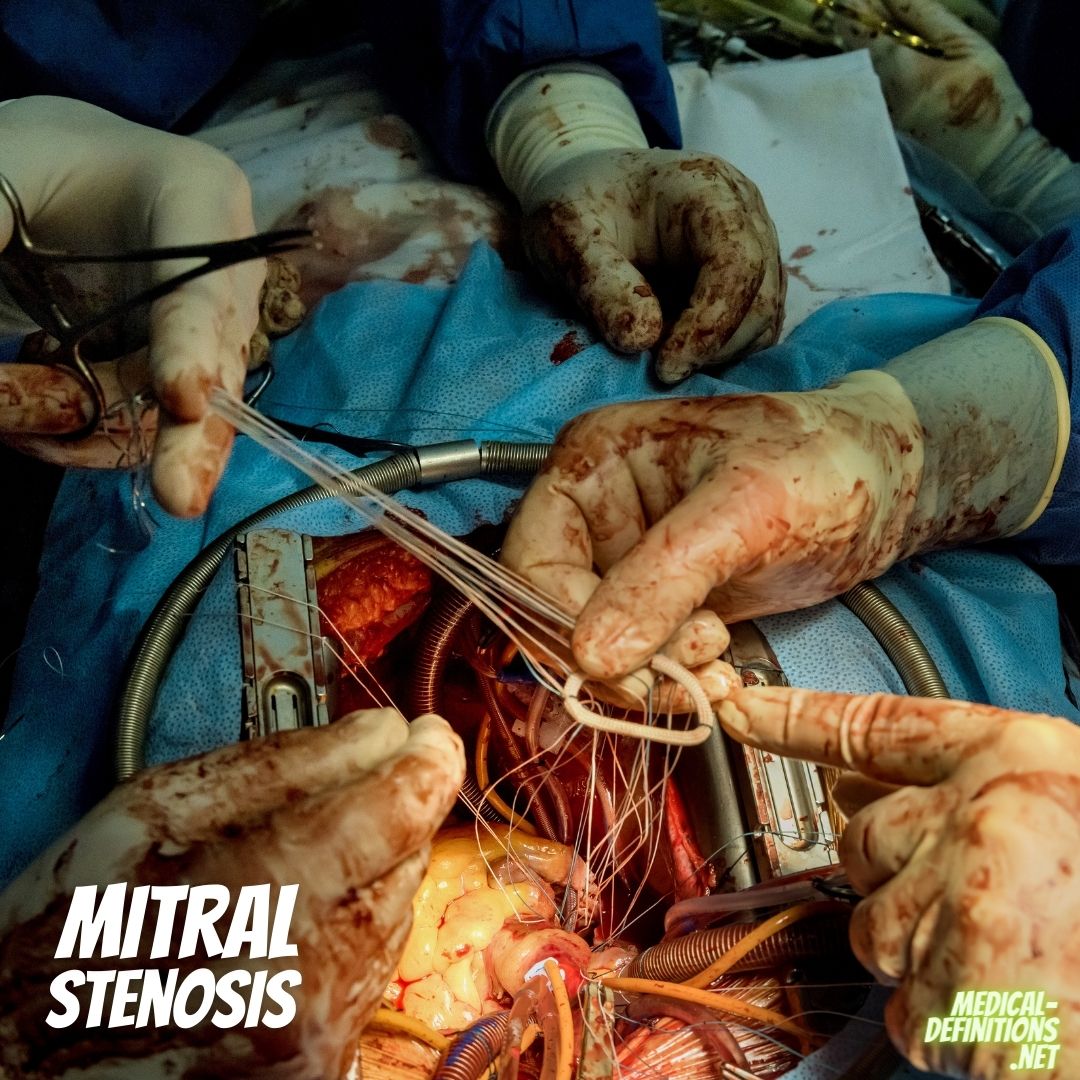 Most people with native valve mitral stenosis are thought to have had rheumatic heart disease, even though only about one-third of them have a history of rheumatic fever.

Rheumatic mitral stenosis causes the leaflets to thicken, the mitral commissures to fuse, the chordae to pull back, thicken, and fuse, and calcium to build up in the valve. Mitral stenosis can also be caused by a birth defect like a fusion of the chords or misplacement of the papillary muscles.

Sometimes, the papillary muscles are too close to each other, and sometimes they are so close that they become one muscle (the “parachute mitral valve”).

The chordae or the tissue around the valves (or both) may also be joined together in these people. In addition, mitral annular calcification can make the mitral valve stiffer and move less in older people and people on dialysis. This can cause a mitral gradient.

Calcium builds up in the mitral annulus but not in the leaflets and commissures as it does in rheumatic heart disease. Instead, calcium moves from the annulus into the mitral leaflet. Mitral valve obstruction can also happen to people who have had a mitral valve repair with a too-small mitral annular ring or who have had surgery to replace their valve (prosthetic valve-patient mismatch or degeneration of the prosthetic valve over time).

Patients with mitral stenosis often have two clinical syndromes. First, in mild to moderate mitral stenosis, the LA pressure and cardiac output may be almost normal, and the patient may have no symptoms or only feel them when they work very hard.

Most of the time, the area of a valve is between 1.5 cm2 and 1 cm2. Due to secondary stenosis of the pulmonary vascular bed, severe pulmonary hypertension develops when the valve area is less than 1 cm2. However, pulmonary edema is not very common in this condition. Instead, low cardiac output and right heart failure are the most common symptoms. Therefore, any measured area of a valve less than 1.5 cm2 should be considered important.

A sign of rheumatic mitral stenosis is an opening snap after A. This is because the mitral valve is stiff. When the LA pressure is low, there is a long time between the opening snap and the aortic closure sound. This time gets shorter as the LA pressure increases and gets closer to the diastolic aortic pressure.

As mitral stenosis worsens, a localized, low-pitched diastolic murmur lasts longer as the mitral gradient stays the same for a longer time during diastole. The diastolic murmur can be heard best when the patient is lying on his or her left side. There may also be mitral regurgitation.

50–80% of patients will develop paroxysmal or chronic atrial fibrillation in the long run. The diastolic filling time goes down when the heart rate goes up, and the mitral gradient goes up. A sudden rise in heart rate can cause pulmonary edema. So, controlling the heart rate is important because a slow heart rate lets the LV fill up more during diastole.

Echocardiography is the best way to figure out if someone has mitral stenosis. This is because echocardiography can also measure the size of the LA. A bigger LA means atrial fibrillation and thrombus formation are more likely to happen.

Most of the information needed can be found through echocardiography and careful evaluation of symptoms. Cardiac catheterization is mostly used to find associated coronary or myocardial disease, usually after the decision to intervene has already been made.

After the first rheumatic infection, most people have a long period with no symptoms, followed by a slow loss of mobility. A woman’s heart rate and stroke volume go up when pregnant. This increases the pressure gradient across the heart, which can bring on symptoms. In particular, the cardiac output stays the same until the end of pregnancy because the heart rate keeps increasing. This increases the mitral gradient by shortening the diastolic time.

If possible, women with moderate to severe mitral stenosis should get their condition fixed before getting pregnant (when the measured valve area is about 2.0 cm2). Symptomatic pregnant women can have surgery, which works best in the third trimester. If the echocardiography valve score is low enough, balloon valvuloplasty is the preferred treatment.

Once a patient has atrial fibrillation, they should take warfarin even if their sinus rhythm returns. This is because atrial fibrillation often comes back, even with antiarrhythmic therapy, and 20–30% of these patients will have systemic embolization if they are not treated. Systemic embolization in people with mild to moderate disease is not a reason to have surgery; instead, warfarin should be used to treat it. The most recent guidelines do not recommend DOACs (dabigatran, apixaban, rivaroxaban, and edoxaban) because patients with atrial fibrillation were not included in the trials that led to their approval.

Symptoms like pulmonary edema, a drop in the ability to exercise, or any sign of pulmonary hypertension are signs that someone needs help (peak systolic pulmonary pressure greater than 50 mm Hg). Some experts think that atrial fibrillation should also be taken into account when deciding whether or not to do something. Most interventions don’t happen until the patient shows signs of illness (stage D). Some people have symptoms when the measured area of the mitral valve is between 1.5 cm2 and 1.0 cm2. Not the estimated valve area but signs or symptoms of pulmonary hypertension should be used to decide whether or not to treat these patients.

Open mitral commissurotomy is done less often now, and percutaneous balloon valvuloplasty has taken place. When comparing the results of surgery and balloon valvuloplasty over ten years, there doesn’t seem to be much difference between the two. It needs to be replaced when the valve has both stenosis and regurgitation or when the mitral valve echo score is much higher than 8–10. To figure out the valve score, the mobility, calcification, thickening, and submitral scar of the valve are given numbers 1 to 4. So, the most you can get is 16.

The risk of dying from percutaneous balloon valvuloplasty is very low (less than 0.5%), and the risk of getting sick is also low (3-5%). The number of people who die during surgery is also low: 1-3% in most institutions. If the valve’s shape stays, the balloon valvuloplasty can be done again. A Maze procedure may be done simultaneously as surgery to stop atrial arrhythmias from happening again. It involves cutting the inside of the heart between the right and left atriums to stop the electrical activity that keeps atrial arrhythmias going. In many places, the LA appendage is sewn shut to eliminate a possible source of thrombosis in the future.

DOACs are not a good choice as a blood thinner. Class ILA says that warfarin should be used for up to 6 months after a bioprosthetic mitral valve is put in. After about 10 to 15 years, bioprosthetic valves tend to break down. When bioprosthetic valve stenosis happens, percutaneous balloon valvuloplasty does not work, but stented valve-in-valve procedures have worked.

But valve-in-valve procedures are still rare because they require a transseptal approach, which is hard to do technically. Nevertheless, early results for patients with bioprosthetic valves, ring annuloplasty, and even some with calcific mitral stenosis have been good, according to reports. People with end-stage renal disease and younger patients are thought to do the worst with bioprosthetic heart valves. However, new data have called into question the role of chronic kidney disease as a major risk factor.

Endocarditis prophylaxis is given to people with artificial heart valves but not to those with diseased natural heart valves. Mitral stenosis can worsen when calcium from the mitral annulus builds up on the leaflets. This is called calcific encroachment of the leaflets (estimated to be about 1 in 6 over 10 years). It doesn’t work well for percutaneous valvuloplasty, and percutaneous mitral valve replacement has only been done a few times.

Patients with mitral stenosis should be checked once a year, and echocardiograms should be done more often as the blockage severity worsens.

I hope you understand about mitral stenosis symptoms and treatment guidelines.