What is MMF in the medical term? Let’s find out MMF medical abbreviation!

It is also occasionally used to treat autoimmune conditions, such as lupus and rheumatoid arthritis, in which the immune system mistakenly attacks the body’s tissues.

Mycophenolate mofetil (MMF) is a prodrug converted to an active form in the body. The active form of MMF is mycophenolic acid (MPA). MPA works by inhibiting an enzyme called inosine monophosphate dehydrogenase (IMPDH). IMPDH is involved in producing guanosine nucleotides, which are necessary for synthesizing DNA and RNA. By inhibiting IMPDH, MMF reduces the production of immune cells, including T-cells and B-cells. This can help prevent the rejection of transplanted organs and reduce inflammation and tissue damage in autoimmune conditions.

MMF is usually taken by mouth as a capsule or oral suspension. It is usually taken twice daily, with food to help improve absorption. The dose of MMF is usually adjusted based on the patient’s weight and the function of their transplanted organ. Common side effects of MMF include diarrhea, stomach pain, nausea, vomiting, and abnormal liver function tests. It is important to take MMF exactly as your doctor prescribes and report any side effects to your healthcare team. 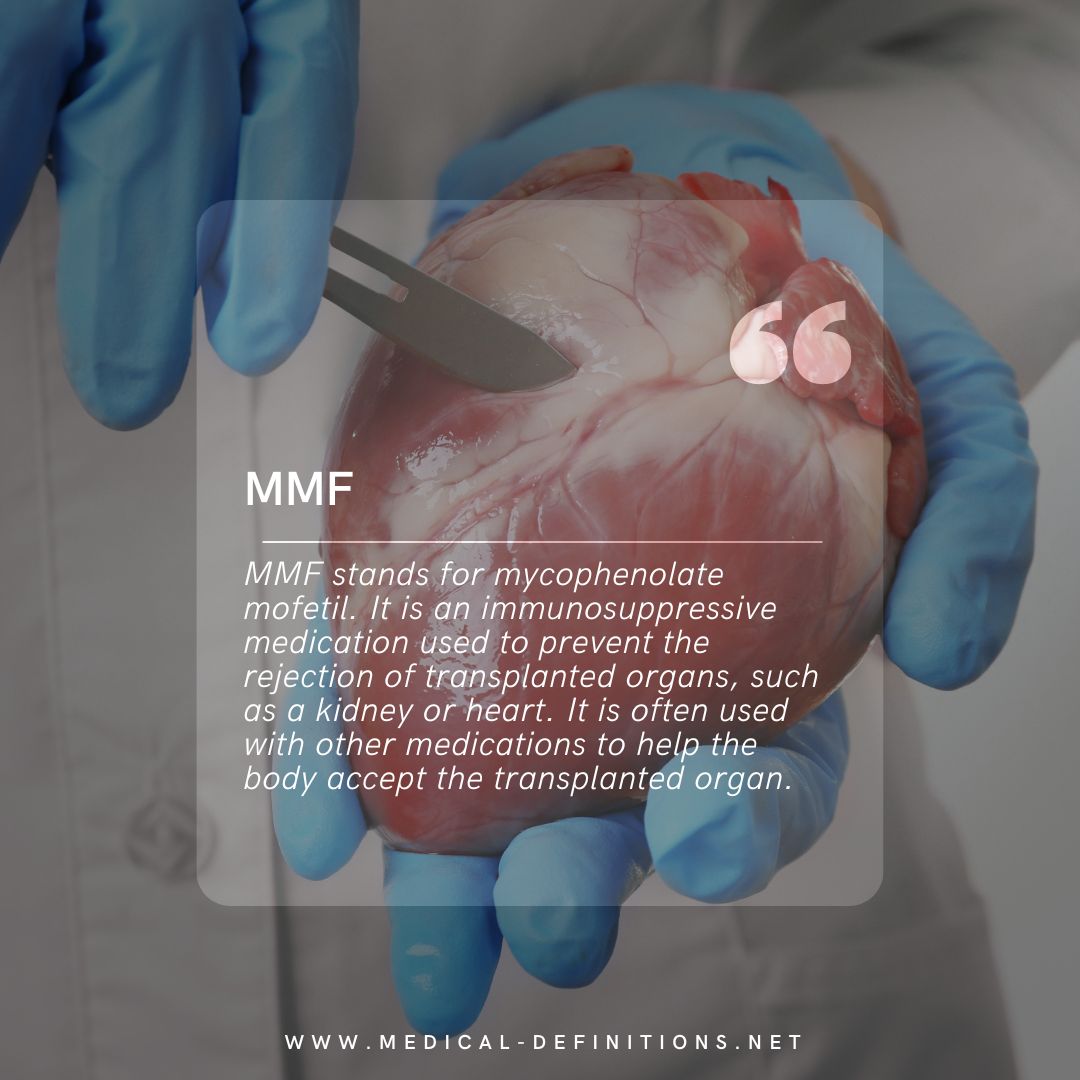 It was first developed in the 1970s as a treatment for leukemia but was found less effective for this use.

In the 1980s, MMF was tested as a treatment for autoimmune conditions such as lupus and rheumatoid arthritis. It was found to be effective at reducing inflammation and tissue damage in these conditions, and it was approved for use in the United States for these indications in 1995.

In the 1990s, MMF was also tested as a medication to prevent transplanted organ rejection. It was found effective at reducing the risk of rejection and was approved for this use in the United States in 1997.

Since its approval, MMF has become a widely used medication for preventing the rejection of transplanted organs and treating autoimmune conditions. It is usually taken by mouth as a capsule or oral suspension and is usually well-tolerated. However, like all medications, it can cause side effects, some of which can be serious. It is important to be aware of MMF’s potential side effects and report any unusual symptoms or side effects to your healthcare team immediately.

While MMF is generally well-tolerated, it can cause several side effects, some of which can be serious.

Common side effects of MMF include diarrhea, stomach pain, nausea, and vomiting. These side effects can usually be managed by taking MMF with food, drinking plenty of fluids, and taking over-the-counter medications for diarrhea and stomach pain as needed.

Less common side effects of MMF include abnormal liver function tests, low white blood cell count, low platelet count, and an increased risk of infection. These side effects can be serious and may require medical attention. It is important to immediately report any unusual symptoms or side effects to your healthcare team.

In rare cases, MMF can cause a serious allergic reaction called anaphylaxis. Symptoms of anaphylaxis may include difficulty breathing, hives, and swelling of the face, tongue, lips, or throat. Anaphylaxis is a medical emergency and needs immediate medical attention.

Mandibulo-maxillary fixation (MMF) is a surgical procedure that involves the fixation of the mandible (lower jaw) and the maxilla (upper jaw) in a stable position. It is commonly used to treat fractures or other injuries to the jaw.

The MMF procedure involves the placement of wires, screws, or plates to hold the jaw in position while it heals. The wires or screws are typically placed through the teeth, while the plates are usually attached to the outside of the jaw. The MMF procedure is usually performed under general anesthesia, and the patient’s jaw is usually wired shut for several weeks to allow for proper healing.

There are several benefits to the MMF procedure. It helps to stabilize the jaw, reduce pain and swelling, and allow for proper healing. It can also improve the patient’s ability to speak and eat and help prevent long-term deformities or jaw misalignment.

The MMF procedure is generally considered safe and effective, but it carries some risks, such as infection, nerve damage, or difficulty speaking or eating. It is important for patients to carefully follow their surgeon’s instructions for post-surgery care, including keeping the wound clean and taking any prescribed medications.

Overall, the MMF procedure is a valuable treatment option for individuals with fractures or other jaw injuries and can help restore function and appearance to the affected area.

Many medical abbreviations contain the letter “MMF,” and the specific abbreviation you refer to may be used in a specific context or specialty. Here are a few possibilities:

Well, I hope you understand about MMF medical abbreviation.