What does RVSP mean? What is the normal RVSP? Let’s find out RVSP medical abbreviation definition!

Here is a list of some common medical abbreviations and their meanings:

Right Ventricular Systolic Pressure (RVSP) measures the pressure in the heart’s right ventricle during systole (contraction). This pressure is an important indicator of the heart’s function and can provide insight into the presence of certain cardiovascular conditions. 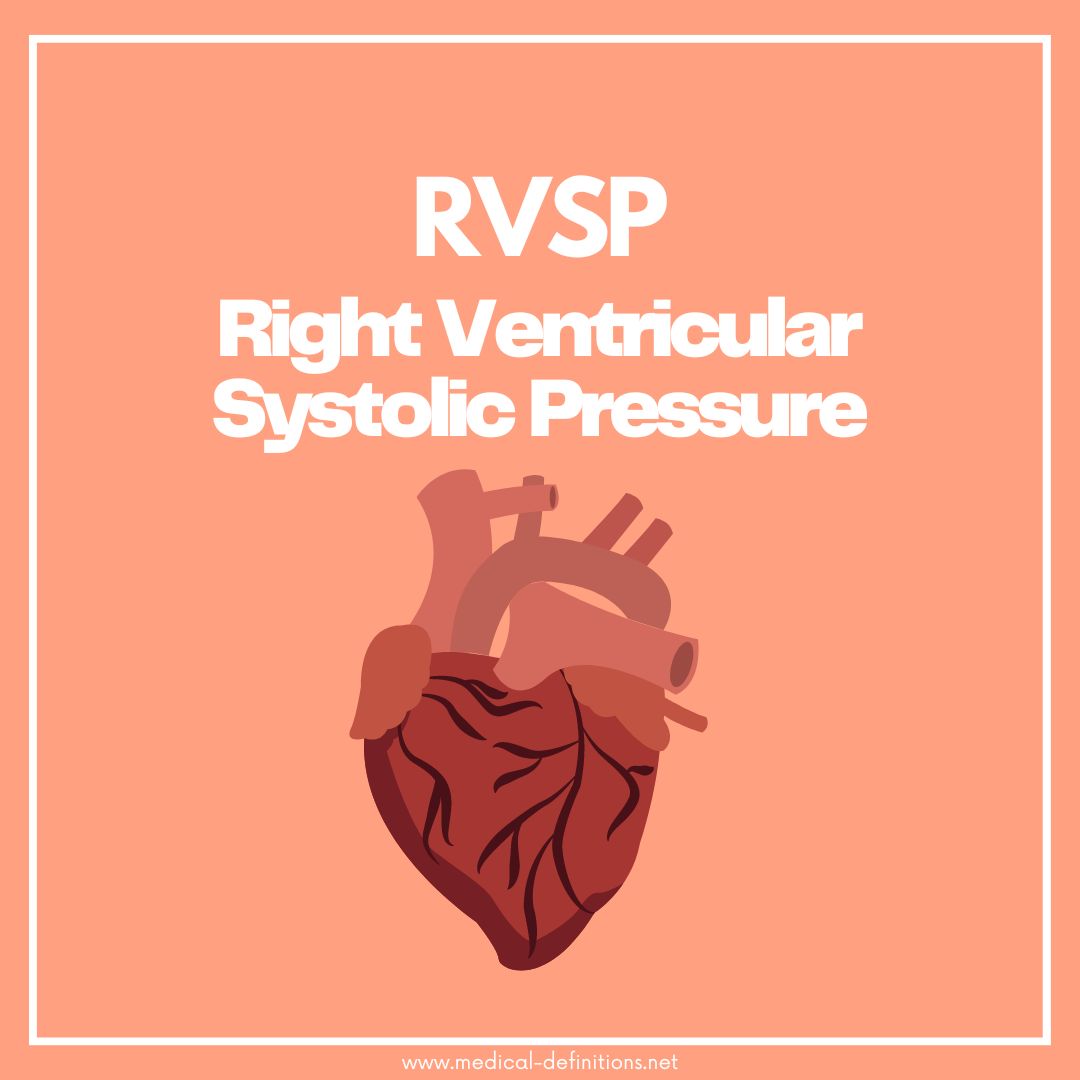 The right ventricle is responsible for pumping oxygen-poor blood to the lungs, receiving oxygen, and returning to the left side of the heart to be pumped to the rest of the body. When the right ventricle is not functioning properly, it can increase pressure within the chamber. RVSP can measure this increase in pressure.

It’s important to note that RVSP is one of many parameters used to evaluate the overall function of the right ventricle and should be interpreted in conjunction with other clinical and imaging findings. Additionally, RVSP can vary depending on the method used to measure it. The results should be interpreted by a healthcare professional familiar with the patient’s medical history and current condition.

Echocardiography is a non-invasive method that uses sound waves to create an image of the heart. During an echocardiogram, the RVSP can be calculated by measuring the peak pressure in the right ventricle during systole and then subtracting the end-diastolic pressure. The RVSP is usually measured in mmHg (millimeters of mercury).

The normal range for Right Ventricular Systolic Pressure (RVSP) can vary depending on the method used to measure it. However, a normal RVSP generally is considered to be between 20-30 mmHg (millimeters of mercury).

Echocardiography is a common method used to measure RVSP, and it is generally considered normal if the RVSP is less than 30 mmHg when measured using this method.

However, when RVSP is measured using cardiac catheterization, a normal range is considered between 15-25 mmHg, which is considered a lower limit.

Pulmonary hypertension (PH) is characterized by high blood pressure in the pulmonary artery, which carries blood from the heart to the lungs.

Elevated Right Ventricular Systolic Pressure (RVSP) is often a sign of pulmonary hypertension. When the blood vessels in the lungs become narrowed or blocked, the right ventricle has to work harder to pump blood through them. This causes an increase in pressure within the chamber, which RVSP can measure.

Various factors, including chronic lung disease, heart failure, congenital heart defects, blood clots in the lungs, and certain medications, can cause pulmonary hypertension. It can also be idiopathic, meaning that the cause is unknown.

As the disease progresses, the right ventricle may enlarge and thicken, which is called right ventricular hypertrophy. This condition can lead to right heart failure if left untreated.

The treatment of pulmonary hypertension is complex and depends on the underlying cause. Medications such as vasodilators, prostacyclins, endothelin receptor antagonists, and phosphodiesterase-5 inhibitors can help to relax the blood vessels and lower blood pressure. Some patients may require oxygen therapy or surgery to correct underlying heart or lung conditions. 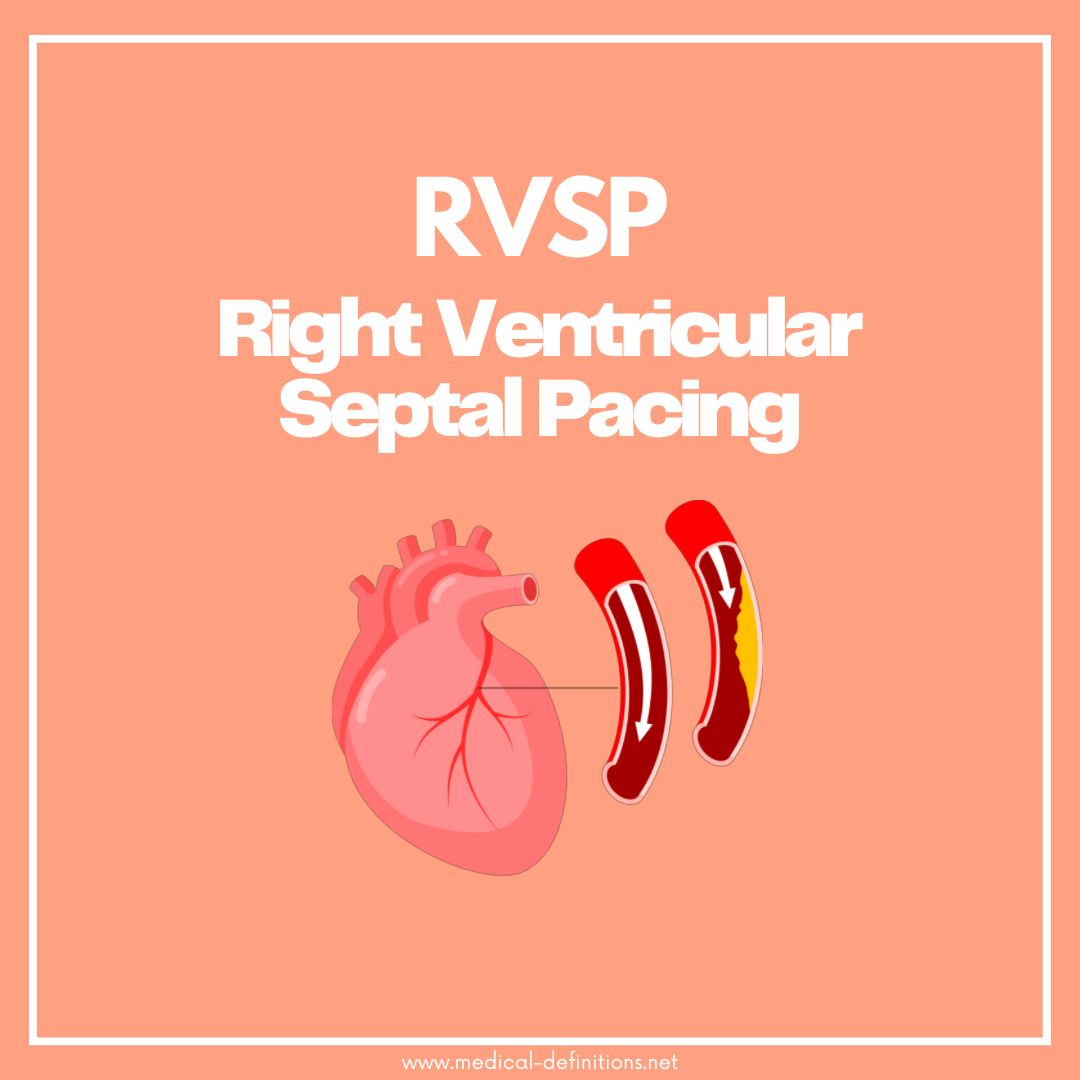 During the procedure, a pacemaker is implanted under the skin in the chest, with one or more leads (thin wires) that are passed through a vein and into the right ventricle. The leads are then positioned against the interventricular septum (the wall between the right and left ventricles) to deliver electrical impulses to the right ventricle.

The goal of RVSP is to ensure that the right ventricle is stimulated to contract in synchrony with the left ventricle, improving the heart’s overall pumping efficiency. RVSP can also help prevent heart block, a condition in which the electrical signals that control the heartbeat are delayed or blocked.

RVSP is a relatively safe and effective procedure with a low risk of complications. The most common complications include infection, bleeding, and lead displacement. However, patients with RVSP may experience less energy, discomfort, or pain at the pacemaker implantation site.

Well, I hope you understand about RVSP medical abbreviation meaning.